Happy Belated Halloween Folks! I am a month late here but what I continue to narrate in this series will scare you and maybe you will finally learn some social responsibility and start reporting Facebook posts with dodgy posts with the Billion Dillion LOT OTG claims. 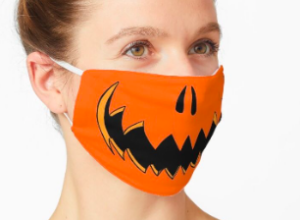 Ok I suppose this article was due in October in the Halloween Season.Here is an image for you all just for fun.No credits here I just thought it was massively funny to have Hannibal the Cannibal wear a 3M9332+ mask.And then, well I got lazy, and very very exhausted with staring at unbelievably flawed verification and due diligence documents in many failed PPE deals, most of which are now en-route to uninterested courts in Europe and USA. 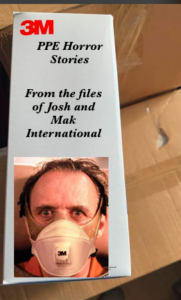 In addition to this being a season of coughing cursing our finances and rethinking the debt we have incurred, you will recall that in October UK was going through an entirely different horror story at that point, much of which will unfold in its rich, gritty, goose-bump inducing lesson it gave the parties involved.And well the surprises continue to roll in.For those who have missed it, have a look here.

Here we go again with one of my favourite respirators (3M still owes me a gift box of these).Oh wait, will you believe what colour they call these respirators on an SGS Report? We have been very fortunate to receive quite a few of these reports from the Channel of 3M suppliers we keep putting under the microscope for the increasingly concerned and panicking consumer base, in the era of rampant PPE Fraud.On the other hand, we have also been quietly reviewing with horror the doctored SGS reports of these respirators, the font being so badly mutated that it brings confused smile, twisted in the painful realisation that we are now living in a very fluidly unreliable time of visual illusions.

Anyways much as I love brooding over PPE documents given to our team for due diligence  for fun and to earn my bread and butter, the blanked out certificates and the ‘redactions’ get scarier by the minute especially when the redacted reports have no way of telling us someone counted the Glove boxes or mask boxes or not.

Same goes for the Billion and Million LOT Proof of Life Videos.The last POL video I saw had the names of 5 business parties written in them.No one knew why the same LOT of Masks had five names of businesses completely unrelated to PPE and two very new and unknown PPE companies.

In case you are curious, here is how a typical dialogue with an aspiring 3M POL ‘artist’ goes like.

So, wait, which one of you Jokers is coughing up the funds to pay for these respirators and do you have the 3M LOT certificates registered in your name?

The answer : All SGS reports and LOT documents will be furnished after you ‘Fund’ our Escrow.It is super confidential you know.

Wait what? Why should an escrow be funded for you as the Seller when you do not have the title to goods.

But wait we did get into the warehouse and have a POL Video.

Ok so you know where the masks are correct?

Do you own the masks or the warehouse?

Do you own the stock as in have you reserved the stock with any payment?

A seasoned 3M Con-artist will state a number of impossible things at this stage, amounting to a twisted Yes, but refuse to prove anything he says.This is the same point you will realise that people claiming to know warehouses with 500 million OTG of gloves or masks in them, cannot come up with the space or rent required to have such a warehouse.

The newbies to the POL games will falter quickly though, failing to even pinpoint where the warehouse is on Google maps.The veterans of fraud will give you a speech on honesty and credibility and how it is a sin to doubt whatever they say no matter how mismatched their statements become as you ask the most basic questions, given that they could hire an expensive Law Firm and some fancy lawyer has ‘attested’ their impossible claims.

The question then is, assuming that none of  these time wasters own the goods they are claiming to sell you, this creates dangerous repercussions for the way we should even view the basic principles of commercial law.Lets recall the Nemo Dat Rules.For those of you with no clue about what I am stating here, a simple WIKIPEDIA definition of this concept of law states ;

Nemo dat quod non habet, literally meaning “no one gives what they do not have” is a legal rule, sometimes called the nemo dat rule, that states that the purchase of a possession from someone who has no ownership right to it also denies the purchaser any ownership title (Source Wikipedia(, (because, who cares about using fancy legal references).

We all know the taxpayers in the US or Europe will pay (dearly) for the sale these people  close or fail to close as middlemen.This is already a reality in case you have all been following the news from a very non-apologetic UK government which handed out contracts like candies earlier this year to every possibly incompetent and financially unreliable supplier known in the UK.This statement is made without apologies to the few competent suppliers though because we all know that none of these government suppliers or procurers had the title to the goods they claimed to sell at the time they were handed out large chunks of cash based on political ties.

Ironically many of these middlemen who have thrived during the failed deals in the last one year through commissions which were deducted even when third grade PPE was supplied, have now styled themselves as  Authentic buyers or 3M Resellers and the result of this fiasco is in the British Newspapers.

Dissecting the Chain of brokers in 3M transactions is as complicated as tracing the Indian trading companies playing with transferable LC’s, hoping for a pound and a half of flesh from each transfer.

The Seller’s Escrow is a completely new twist to the original concept of Escrow accounts which were monitored by properly licensed financial authorities in the saner pre-COVID Era.

Trust and IOLTA accounts have been abused to their very worst this year, with lawyers trapping millions of dollars in funding in their IOLTA accounts and claiming that their Bandit of a client deserves ‘client confidentiality’ and there is no way they will let the funds (conveniently earning a LOT of interest) sitting in their account go without a long , costly and exhausting court fight.Surprisingly I have not seen any licence cancellations of such lawyers all year.So is the lawyers IOLTA the new haven for proceeds of crime? Only time will tell, but I can only tell you one thing.We need to question and re-question trade practices and bring the connected actors to these failed PPE deals to accountability.Whether these are the lawyers, bankers or PPE agents, they all owe a duty to the taxpayers, who will now pay for demanding PPE from their Welfare states.

Deconstructing the Fool’s Paradise: How illegal and dangerous ‘Anti-Covid19’ masks are being peddled and why our regulatory response will continue to be insufficient and ineffective against false advertising

The doomsday scenario projected by the mismanagement of the COVID19 pandemic has allowed the rampant abuse of people’s goodwill and fears by brokers and agents who have not only taken this opportunity to launch advance payment fraud but also to sell people less than satisfactory goods for unbelievably high prices.A primary risk of buying from […]