Let’s just say, that I have never been a fan of ‘consulting’ and ‘sourcing’ companies and well, find their whole business model skeptical. However the year 2020 finally pushed me into something I was always fond of, yet dreading to venture into, namely legal advice and scrutiny on product sourcing, which has become an sector vulnerable to potent fraud and business risk as a consequence of COVID19. It is true that product sourcing is the ‘true poison’ or ‘necessary evil’ of a restricted post Covid19 procurement landscape.It is also true that the law enforcement authorities and lawyers have failed businesses in providing them adequate protection from these hazards throughout 2020. 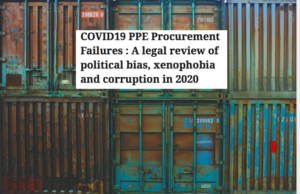 As I see it sourcing is connecting the dots on a plain white paper, where only you as the sourcing expert can see the dots and you have to trust your best judgement to connect them.In the rare case of PPE, contacts alone are not enough.During the period between April to May alone, the general law spelling out qualification for ‘legal’ PPE and customs law pertaining to PPE safety and taxation changed so rapidly that at one point all we heard were stories of containers of masks from China lined up at the customs offices/ports of European countries and detained due to ‘insufficient’ paperwork.

We had the pleasure of ‘telling off’ quite a few enterprising agents from Europe who were ‘buying for their governments’ and had no clue what a valid CE mark should look like or should be placed. Equally clueless were the enterprising Chinese agents who, desperate to make a sale would forge SGS reports, Laboratory Tests and even basic factory papers.Things were made much more uncertain under FDA’a haphazard blacklisting and whitelisting of KN95 brands.Factories saw their orders getting cancelled overnight.There was also a rumour that all KN95 masks were OEM produced and factories were simply placing their labels on them.

The OEM based dishonestly was taken to yet another level when we saw brands claiming to be Swiss or European or even American, claiming to sell non-Chinese masks which were ‘manufactured’ in China.Only when we scrutinised their papers closely as well as production certificates, were we able to see that the same xenophobia they thought they could cash upon, would involve the hardworking efforts of Chinese factories.

The Xenophobia got so obvious and ridiculous that we saw a couple of very dishonest brokers from Germany  (who we are sure will meet their logical end in jail very soon) claim that 3M China and 3M Singapore were unable to make proper filters for 3M N95 masks.The concept fooled many people including our legal team (sadly) for a short while until we had a nice chit chat with the nice ladies at 3M’s helpline and they stated that their production no matter where it was carried out in the world was 100% the same, as with all multinational companies.Then we had a very good opportunity to dig through some very public Shipping records of a large majority of respirators produced by 3M China going to FEMA, USA every single month.

Then again during the course of 2019 and in particular 2020, I witnessed a large number of businesses collapsing in the hands of irresponsible and unethical brokers. During the Pandemic, in particular, large companies which lost millions of dollars of worth of state contracts, stood speechless as they could do nothing more than freeze the ‘commission’ accounts of such brokers who would simply collude with the fraudulent sellers and run off with the payment with an untraceable case of non-delivery or at worst defective delivery.

As I see it, 2020 was the worst year for international business, as we saw agents pretending to be buyers or sellers just to top up their profits on prices or to artfully distort market prices for their own gains.Well meaning sellers offering humble profit margins were shunned for fraudsters who would offer unbelievably low prices where the product obviously did not exist.

Equally so, what led to our Firm specifically aiming legal consultancy services to international procurement in the PPE and Medical Equipment Sector was the rampant increase in dishonest lawyers during 2020, who all saw colluding with Fraudsters as a guarantee of a good payday. It is equally sad to see that International Bar associations have no control on such rogue lawyers who continue to run their flashy websites. While our Firm has been instrumental in initiating and facilitating legal actions against such law firms during the Pandemic, we have noted that alarmingly enough, some of the biggest scamming lawyers have originated from various jurisdictions in Europe and USA and not Africa or Asia as people tend to assume.

Our blogs will record our journey on legal advice on procurement and business services as we go along in adopting the challenges of procuring the post-Covid19 era.If you are struggling with the legal aspects of any related business and feel we can pinpoint you in the correct direction, we are only an email away at aemen@joshandmak.com

Scammers will use photoshop and snake oil marketing lingo to sell dust as Gold and degrade Gold to dust. Such is the power of the the Advertising gurus of the West, and well everywhere.Right on as the COVID19 struck, Vitamin C, Nutritional cocktails, colloidal silver and God knows what else, started being promoted by ambitious […]